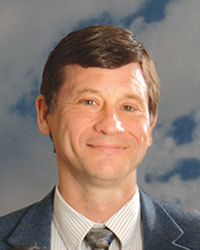 Dr. Vockley received his undergraduate degree at Carnegie-Mellon University in Pittsburgh, Pennsylvania, and received his degree in Medicine and Genetics from the University of Pennsylvania School of Medicine in Philadelphia, Pennsylvania. He completed his pediatric residency at the University of Colorado Health Science Center, and his postdoctoral fellowship in Human Genetic and Pediatrics at Yale University School of Medicine in New Haven, Connecticut. Before assuming his current position in Pittsburgh, Dr. Vockley was Chair of Medical Genetics in the Mayo Clinic School of Medicine. Dr. Vockley is internationally recognized as a leader in the field of inborn errors of metabolism. His current research focuses on the molecular architecture of mitochondrial energy metabolism. Dr. Vockley has served on numerous national and international scientific boards including the Advisory Committee (to the Secretary of Health and Human Services) on Heritable Disorders in Newborns and Children where he was chair of the technology committee. He is co-chair of the International Network on Fatty Acid Oxidation Research and Therapy (INFORM). He also serves as chair of the Pennsylvania State Newborn Screening Advisory Committee and the American College of Medical Genetics Therapeutics Committee. He is a past president of the International Organizing Committee for the International Congress on Inborn Errors of Metabolism and the Society for the Inherited Metabolic Disorders (SIMD), and co-founder and editor of the North American Metabolic Academy.

No items available at this time.